The Wide Area Saturation Projectile (also known as W.A.S.P. in short) is a rocket launcher-type weapon issued by both Red Faction and Commonwealth during the civil war.

The W.A.S.P. is primarily an anti-vehicle weapon. More powerful than the NGL-8 Nanotech Grenade Launcher, the W.A.S.P. launches 150mm HEAT-type rockets. Each magazine holds six rockets. It is practically the most powerful weapon available - it is unrivalled against mobile armour units, and the large blast radius makes it easy to kill groups of enemy personnel as well. The disadvantages of this weapon are the self-damage risk, low rate of fire and very limited ammo supply. Therefore, the W.A.S.P. is best used for long-range engagements. It is Geo-Mod compatible, blowing large holes in the terrain.

W.A.S.P.'s secondary function is the heat-seeking guidance feature, enabling the missiles to "lock on" vehicular targets. The lock-on takes a moment to acquire, so be sure you are in good position (preferably near cover) before you attempt to strike against the target.

The W.A.S.P. appears for the first time in a secret location in To The Roof level of Public Information Building chapter. The W.A.S.P. is used by Sopot's heavily fortified ground troops and guards. Later, it is used by Red Faction against the Molov-led Nanotech Enhanced Forces following the death of Sopot.

The W.A.S.P. appears in the multiplayer mode, but without the secondary firemode. 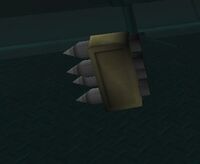