The War Maul is a melee weapon in Red Faction: Armageddon, similar to the Sledgehammer from Red Faction: Guerrilla.

There are two modes of attack: primary fire delivers a swing from the side, while secondary fire delivers a brutal overhand blow, useful for killing Creepers who are too low to be hit by the primary attack and is also very useful against Wraith, which can instantly kill them, before they have a chance to cloak away after damaged to half of their health.

Although the Maul is not a standard Red Faction weapon, the miners of colonies are the only ones that use them. 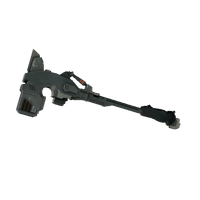 Darius with the Maul

Darius whacking with the War Maul