Victor Sopot is a ruthless and oppressive dictator, who rules over the Republic of the Commonwealth on Earth as Chancellor. Sopot is the main antagonist during the first half of the game.

Nothing much is really known about Sopot's early life before 2080. Using nanotechnology obtained from the fallen Ultor Corporation, Sopot is able to create his own squad of nano-enhanced super soldiers. He would use the squad to complete important missions that requires their enhanced combat skills.

Eventually, Sopot begins to fear what he has created, and believes that the squad may become too dangerous and possibly rebel against him. Due to this, Sopot declares them as enemies of the Commonwealth, and orders his military to find and eliminate them, after which he plans to replace the squad with a less intelligent group of super soldiers, known by the Red Faction as "The Processed".

Due to this betrayal, the squad, with the aid of the Red Faction rise up against Sopot and his military. Despite their efforts, Sopot's forces are unable to eliminate them. Under the leadership of Crate Molov, the squad of super soldiers ultimately emerge victorious in their battle against Sopot and his forces. Sopot is eventually executed in his own Citadel by Alias, the squad's demolitions expert. Alias executes Sopot by forcing him into the Citadel's missile silo at gunpoint, before launching the missile, obliterating Sopot in the blast.

Concept Art of Sopot without name 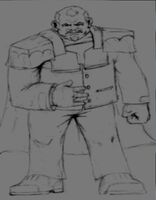