The Saints Row Wiki also has an article about Ultor.

The Ultor Corporation, named after the ancient Roman temple devoted to the Roman god Mars, is the antagonist of Red Factionand the sole power on Mars at the time of the game's events. Their rule is an infamous chapter in the history of human settlement on the red planet, marked by the enslavement of their workforce and free run to characters such as their insidious head scientist, Axel Capek.

In the course of the First Martian Revolution, Ultor is overthrown and dismantled, as the Earth Defence Force takes control of Mars and rival companies - Kuroari, AmRuKuo, Colonial Transit Authority, Jangwa Mashamba - move in for the kill and seize the lucrative mining rights, especially precious noachite that's the source of Ultor's wealth. The company is dismantled, but its most vital secrets, such as Axel Capek's biochemical experiments and advancements in nanotechnology, remain safely in the hands of Ultor remnants - the Marauders.

While Ultor has interests in nanotechnology and weapon manufacturing, they are primarily a mining company; this can be seen in their logo, a stylized continuous mining machine blade wheel.

The Ultor Corporation colonizes Mars in around 2050 to take advantage of its vast untapped mining potential, and the advantages of its remote location. They ship it all back to resource-stripped Earth, centrally a substance known as Noachite which in Earth's economy could make fortunes. The Corporation sees everything in terms of profits, and ignores increasingly hostile relations between the miners and the security forces, their technicians carefully filtering all message traffic between Mars and the Earth to keep it unaware of the situation.[1]

Meanwhile the head of the research department, an unethical scientist named Axel Capek, performs all manner of experiments far from the prying eyes of any moral authority. Nevertheless, he basically creates the field of nanotechnology, backed by the enormous resources of the Ultor Corporation. His unparalleled advancements which will effect the fate of Mars for centuries after his demise.[1]

When Capek first arrives on Mars from Earth, he faces significant opposition to his immoral experiments from the then Administrator. This comes to an abrupt end when the Administrator becomes a test subject in Capek's experiments. His replacement, Administrator Davis, along with the new deputy administrator, Richard Gryphon, and any other prospective opposition within Ultor are cowed as a result and he has free reign in his experiments.[1]

Even then he doesn't have, in his own eyes, enough control to fully push his research to its heights. He long believes that an uprising among the miners will be beneficial to him, allowing him spirit away prisoners in all the confusion and fighting to use in his research and obtain more test subjects, as well as providing an excuse for those already taken. It is likely then, that as a result he deliberately helps create the First Red Faction Uprising, which is likely the reason behind spreading the disease through the Martian population prior to the conflict. After he tested the plague on the old administrator, Administrator Gryphon took over.

He then experiments on captured miners, turning them into deformed monstrous mutants through nanotechnology.[1]

"I've ordered the shaft sealed, and its location obscured. This is a plague which could devastate Mars, an Armageddon only a madman would unleash."
―Axel Capek about the alien species.[src]

Unbeknownst to most outside his department, many of his breakthroughs, if not all, in the field are originated from the ill-fated MASTers expedition he leads back in 2067. He discovers an alien species hibernating deep within the bowls of Mars known as The Plague, which his observations seem to indicate the possibility they utilize a form of organic biotechnology interworked into their own bodies.[2]

The bulk of Martian Advanced Science Team died at the hands of a few of the creatures and Capek, its leader, is forced to ascend alone. After he escapes, he has the entrance of the ancient shaft sealed beneath the molten magma of an Ultor facility.[2]

After the MASTers expedition, Capek continues his work. He creates his own mutated Plague which would later appear during Red Faction uprising, encountered most notably by hero of the revolution Parker. At the time they are often simply known as 'mutants'.[1]

"This whole place is going to hell. I knew Capek was trouble the minute I laid eyes on the freaky egomaniac. But he's Ultor's golden boy and no one listens to me. This complex is going to explode and I'll have to put the pieces back together. I'm gonna make sure Capek's caught in the blast."
―Colonel Masako[src]

In 2075, the First Martian Revolution finally kicks off with growing discontent among the miners and a disease which rips through their ranks, secretly controlled and instituted by Capek.[1]

The miners in M4 mine rise up supported by a growing movement amongst the miners called the Red Faction, lead by their charismatic and mysterious leader Eos. First up on their agenda is finding a cure for the Plague, and when Gryphon defects they know just who to look to.[1]

Axel Capek is relying on Colonel Masako and her Mercenary Regiment to defend his facilities, but what he doesn't factor into account is that while he has crushed all thought of opposition in the Administrative department, he still has one enemy within the company who isn't threatened by him. Masako withholds her troops from the frontline until after the miners lead by Eos have raided is main Laboratory complex.[1]

Only once Capek is dead did Masako join the fray, driving back the miners. When the miner revolt begins to falter, they get out a message to the Earth Defence Force who come to their aid and help depose the Corporation.[1]

In earth, they are aiding both sides on the Commonwealth Civil War it might be that during their fall in Mars, They switch sides to the Red Faction for taking down Sopot forces. However, the reasons of their close down are still currently unknown as there are no facts to prove it.

After the fall of Ultor, Capek's personal cadre of scientists flee from the victors deep into the Martian caves. With them is much of their research, and a device known as the Nano Forge. They will later emerge, after the terraforming, upon the surface in the furthest reaches of the Badlands, but their bitter exile has turned them into the Marauders, a savage warrior culture who hates both colonists and EDF. Nevertheless, they keep alive the scientific devotion of their ancestors continuing triumphing in the shadow of red planet.[3]

Ultor was a megacorporation structured along the usual hierarchic paths: Greedy capitalists on Earth getting rich and fat on the backs of the working men in the mines of Mars, thanks to the regular shipments of noachite leaving the Red Planet for Earth. While mining was the primary source of its extreme wealth, Ultor had its fingers in dozens of pies, including weapons manufacturing. All equipment issued to Ultor security forces on Mars is produced by Ultor, from the humble 10mm pistol, through automatic weapons, to explosives, rocket launchers, and flame throwers improvised from defoliators. All vehicles also carried Ultor-make weapons, from autocannons to torpedoes and heat-seeking missiles.

Ultor practiced strict compartmentalization, deliberately creating silos within its organization to cover up the fact that miners weren't really intended to mine noachite. In reality, they were guinea pigs for Axel Capek's twisted experiments, with their mining quotas merely an added benefit. Research into nanotechnology was carried out in the utmost secrecy, with the goal of creating the nanoforge, a universal maker that would guarantee Ultor limitless wealth.

An image of Mars prior to the First Martian Revolution, when was still controlled entirely by the Ultor Corporation.

Workers in the Ultor mines. 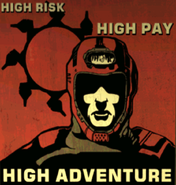 A group of Ultor Security Guards.

The Ruins of Ultor, as seen in Red Faction: Guerilla