The Ultor Armored Personnel Carrier (also known as Ultor APC in short) is a slow but powerful vehicle used by the Ultor Corporation.

During the First Martian Revolution against the Red Faction and, presumably, the Earth Defense Force. It came with equipped with a ULT-6AG 20mm Chain Gun and a forward-mounted 80mm Mortar. The heavy armour provided excellent protection against bullets and explosives. Unlike the vast majority of Martian vehicles, this APC has tracks.

In Commonwealth Civil War, during the attack on the Citadel from the Red Faction lead by Crate Molov, theAPC can also be located turned upon its side in a burning warehouse.

During the Second Martian Revolution, many of these APCs can be found littered around the world, particularly in the Badlands, highlighting the areas of conflict in the revolution or rusting and falling apart in old Ultor repair shops. 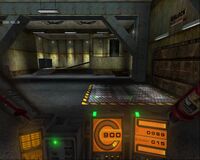 The APC in Red Faction II