The UFT-1 Ultor Flamethrower is a weapon, which appears in Red Faction.

UFT-1 Flame Thrower is designed by the Ultor Corporation, adapted from the defoliator they used for clearing plants, and issued to their troops in the First Martian Revolution. The weapon sports a four-meter column of flaming fuel - twice that of its humble cousin - which sticks on contact to targets and spreads like fierce wildfire. The flamethrower was used by both Ultor Guards and Masako's Mercenary Regiment during the conflict.

Its fuel canisters serve a secondary purpose as incendiary bombs. It is advised to use the canisters as bombs when the canister is almost empty, since the power of the explosion is the same as if the canister were full. 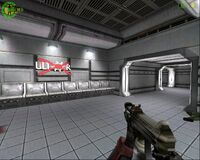 The Flamethrower in-game
Add a photo to this gallery
Retrieved from "https://redfaction.fandom.com/wiki/UFT-1_Flame_Thrower?oldid=21590"
Community content is available under CC-BY-SA unless otherwise noted.