The UBS-4 Riot Body Shield is a riot shield used by the Ultor Corporation on Mars prior to their defeat in the First Red Faction Uprising.

The Riot Shield is one of the two melee weapons in the game, the other is UCB-24 Control Baton. Being a shield, the UBS-4 isn't very powerful offensively, but despite its lightweight design it can absorb a lot of punishment sparing its user from gunshots and blasts for a while (making it in fact a ballistic shield). It can cover your whole body from the front, while its transparency does not obstruct your field of vision. Since it disallows carrying any other weapon at the same time, the Riot Shield's best use is for escape - running from overwhelming enemy fire in order to reach safety.

When cornered, the Riot Shield may be used to bash enemies with it. This attack does little damage however.

It is noteworthy that the Riot Shield is able to absorb one shot from the Rail Driver, making it an useful saving-throw item against otherwise an instant-kill weapon. However the shield is destroyed in the process and the player has to find a replacement.

The Ultor Corporation forces themselves aren't seen using the Riot Shield at all throughout the game. Its supply is quite scarce too, so do not rely on it. 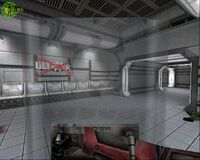