The UAS-10 Ultor Automatic Combat Shotgun is the standard combat shotgun for those in the service of the Ultor Corporation leading up to the First Martian Revolution. The Shotgun also saw use by the Red Faction in the latter half of the conflict.

The UAS-10 is a rather unusual shotgun. The first peculiar thing you may notice about it, is that its base fire actually unleashes two shells at once. Most often, a single such blast will instantly kill any human enemy (especially if aiming at the head). Another surprise is that this double shot is quite accurate, with tight spread maintained even at mid-range. The primary fire is best used against single enemies - try to not miss, as the double shot requires to cycle the weapon via pump-action, leaving you open to return fire.

UAS-10's secondary firemode is fully automatic, emptying its 8-shells magazine in about one second. Needless to say, the resultant damage output is terrific, making the Shotgun an effective room cleaner. This power comes at a cost of accuracy, however, with much wider spread than the double blast. The secondary fire is best used when engaging multiple opponents.

Also, do not worry to much about reloading time, as the UAS-10 is fed with box magazines. This convenience makes reloads quite a quick action.

Because of the limited range, the Shotgun is best suited for close range combat. It offers very high damage against hostile personnel, but lacks armour-piercing capability, rendering it practically harmless against heavily protected targets such as combat vehicles.

The Shotgun first becomes available at the start of the barracks section. The Shotgun is mostly used by the regular/riot and enviro-guards. It is also used by the guard commanders as well whom use the Shotgun in its secondary fire option.

The Shotgun is also available in the multiplayer.

Following a century later, The Marauders have based the schematic design upon this model to manufacture their own variant of Shotgun for their small arms. Later in 2175, the Red Faction adopt the design the same way to create their own version of Shotgun during the Plague Armageddon event. 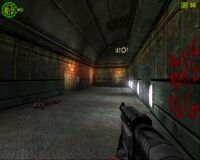 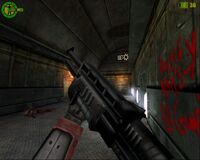 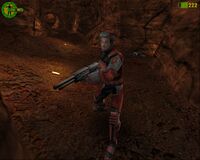 Red Faction member armed with the UAS-10 Shotgun
Add a photo to this gallery
Retrieved from "https://redfaction.fandom.com/wiki/UAS-10_Automatic_Combat_Shotgun?oldid=21598"
Community content is available under CC-BY-SA unless otherwise noted.