The UAR-42 Ultor Assault Rifle is the standard assault rifle for those in the service of the Ultor Corporation leading up to the First Martian Revolution.

The Assault Rifle main fire mode is three-round burst which is good for medium to long range combat. However, the secondary fire mode is fully-automatic which is excellent for close range encounters, but suffers from somewhat wide spread. The UAR-42 holds 42 5.56mm rounds per magazine, and its reload is pretty fast, so it is viable to do even in the middle of a firefight.

The Assault Rifle is a very balanced weapon overall, a mainstay for the much of the game. However, later on the Assault Rifle becomes less useful after picking up its semi-auto counterpart, the precision rifle. Also, the assault rifle is not very useful against the Mercs, although it can damage them significantly thanks to its high penetration power.

The Assault Rifle is also available in the multiplayer. 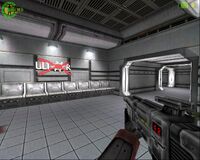 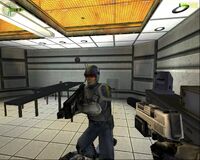 Assault Rifle in the Playstation 2 version.
Add a photo to this gallery
Retrieved from "https://redfaction.fandom.com/wiki/UAR-42_Assault_Rifle?oldid=21817"
Community content is available under CC-BY-SA unless otherwise noted.