The UAP-32/20 Ultor Submachine Gun is a submachine gun issued for the highly trained elite guards employed by the Ultor Corporation during the First Martian Revolution.

The Submachine Gun is an unique firearm in the game. It has the ability to switch between two types of bullets. The primary fire option use the 32 round magazine loaded with the 12mm. It has low damage but much more accurate and has a tighter spread than the secondary fire option. The alternate fire switches to the 20 round magazine loaded with 5.56mm. It has more damage than it's primary counterpart but suffers from high recoil and spread. The primary fire best used in close and mid ranges but the secondary fire strictly close range due to the high spread. The Submachine gun is the weapon of choice for the elite guards but the regular security guards can be seen using the weapon.

The Submachine gun is available in the multiplayer as well with some minor changes. In multiplayer it has a 64 round magazine but does not has the option to switch it to it's secondary fire. 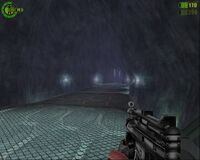 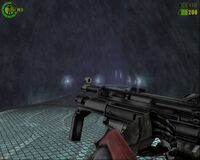