The Plague spent most of its early history on the planet in deep hibernation, it’s existence concealed from the human population by the select few who knew of its presence. One of these individuals was their discoverer, Axel Capek, lead scientist of the Ultor Corporation who, with his Martian Advanced Science Team (MASTers), explored an ancient shaft that seemed to have been carved deliberately by some unknown precursor race originally native to the Red planet.

He speculated that the Plague, like humans, were not native to the planet, but were an invasive species that had been introduced at some unknown historical point. The Seal which kept the Plague in hibernation acted to control the environment within the caves; extremely advanced technology that was far beyond the current capabilities of the human colonists, even by the time of its destruction by Darius Mason.

Capek's scientific discoveries were a direct result of what he found down there, leading to the creation of nanotechnology and the Nano Forge, but he mostly experimented with samples of DNA taken from the Plague, creating hybrid mutants by splicing them with humans and various other creatures. These were referred to as the Ultor Plague of 2075 and were destroyed after the conclusion of the First Martian Revolution.

The Plague themselves made their first real appearance in the Plague Armageddon, let loose by the Cultists, a splinter group of the Marauders and parts of the remaining White Faction, led by Adam Hale.

The Plague was later destroyed after Darius repaired the Terraformer, making the surface habitable for humans but deadly to the Plague, suffocating them with a newly restored Earth-like atmosphere. It is possible however that there are still Plague hives hidden deep underground, evolving, adapting, waiting for their chance to attack.

The majority of the Plague are Insectoid in appearance. However, some appear to have humanoid features, perhaps as a side effect of consuming and absorbing human DNA. The most notable part of their appearance is that their elbows, knees and body spikes are bioluminescent, much in the way of earthly deep sea fishes. All Plague have their own unique abilities that usually consist of ranged or close-quarters attack, such as acidic bile or claws. Most Plague are taller than humans, with the exception of the creepers.

To the miners on Mars, during the First Martian Revolution, the plague was a mysterious force killing miners and creating grotesque mutants, but that is all that is known, its alien origins completely unknown to the miners and the first Red Faction rebellion. They attack the player from time to time in the first game and also serve as two bosses, one of which is optional. Upon meeting mutated miners, Axel Capek's voice will come make taunting remarks along the lines of, "See any old friends, Parker?" These are not known to be aliens and were thought to be mutants in the first game. The mutated miners ARE mutants for sure, the rest are not confirmed to be.

Concept art of the Ravager.

Early Concept art of the plague. 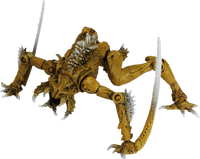 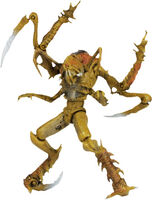 Background information about the Plauge in one of the loading screens.
Community content is available under CC-BY-SA unless otherwise noted.
Advertisement