The Elite Guards were Sopot's bodyguards but they often acted as special forces for the Commonwealth's Military. During the raid on the N.A.N.O Military Facility a squad of elite guards, led by Alias Burke, successfully stole the Nanocell despite the heavy casulties. The elite guards wear dark grey armoured outfit with several "SG" markings on them. The elite guard leader's outfit is the same only differance beign that their armor is painted in white, instead of the dark grey colour. The elite guards are the main enemy force in the latter half of the public information building chapter, and largely replace the security guards. Later they reappear in the citadel's missle silo where they trying to hold-off Alias from catching up to Sopot.Their armoured outfit offers them good protection against small arms fire, but offers minimal protection against explosives and armor-piercing rounds.

Elite guards are much skilled oppoments than the security guards and with their armoured outfit they are not afraid to attack the player directly. They are also much more organised during combat and if they have the chance they will try to flank the player. Their biggest weakness is the weapons they use. Elite guards are mostly use CMP-32 Machine Pistols and CSMG-19 Silenced Machine Guns and later CAR-72 Assault Rifles. They also like to dual wield the machine pistols dealing twice as much damage to the player. 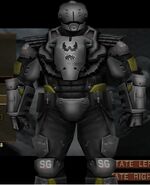 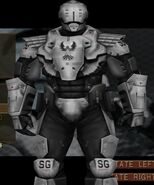 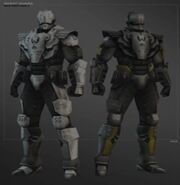