Sophie Quill is a high ranking member of elite unit of nano-augmented soldiers created by Victor Sopot, the dictator of Commonwealth.

When Sopot betrays the unit and orders its annihilation, she, along with the other members, join the Red Faction to combat Sopot's regime. She provides sniper support for the squad. She uses the Precision Rifle, a semi-automatic sniper rifle with impressive zoom.

Her first appearance is in the Public Information Building mission, where she attempts to seek out Sopot. She also briefs Alias on blowing the bridge up, providing him with satchels, demolition charges, and sniper support.

After Alias assassinates Sopot, the leader of the squad, Crate Molov, proclaims himself to be the new dictator of Commonwealth, an event which leads to the squad being ripped in half. Quill, alongside Repta and (seemingly) Shrike, stays on Molov's side. Quill is killed in a duel with Alias, in an old church. 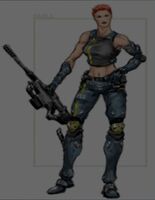 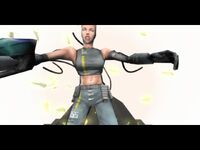 Quill killed by Alias during a showdown at the Castle in cutscene
Community content is available under CC-BY-SA unless otherwise noted.
Advertisement