The Singularity Cannon is a Marauder weapon which stems from the singularity bomb used by the Earth Defense Force. After the Second Martian Revolution the Marauders gain a lot of additional tech from the fall of their hated enemy and combined the cutting edge military technology it found with their own broad research, in this case the fusion research of the long-gone Ultor Corporation.

The Singularity Cannon is one of the most powerful weapons in the game in terms of how much damage it can deal per shot and over a short period of time. The gun fires a fast-moving ball of energy that essentially turns into a miniature black hole on impact. Anything that is physics-affected is sucked into the black hole, or at least slowed by it and takes damage over time. Eventually the 'singularity' detonates, making a large explosion which expels caught enemies and debris all over, as well as creating a shockwave that does additional damage to anything nearby. This weapon has very limited ammo but very high firepower; it is ideal for dealing with tightly-packed groups of enemies or for destroying structures quickly.

Darius with the Singularity Cannon 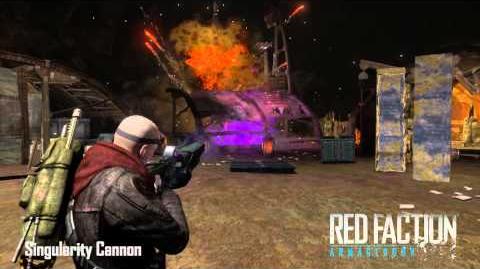