The Sentry Turret is a stationary machine gun/grenade launcher used by the Ultor Corporation and Masako's Mercenary Regiment during the First Martian Revolution.

The sentry turret is a stationary weapon, rarely encountered in-game. The turret has two variants. The first and more common variant fires machine gun rounds at a rapid succession. The second variant fires grenades, which are detonated on impact making it much more dangerous than it's machine gun variant. These turrets can function without a person operating it, by simply enabling the automated mode.Then the turret automatically engage any unauthorized person entering the turret's firing range. It is why Ultor deployed these turrets during the revolution to lock down certain areas where the guard numbers were severe. 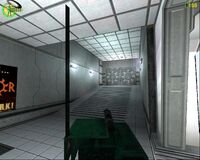 Mercenary variant of the Sentry Turret