S-271 Stealth Submarine is a watercraft that appears in Red Faction II.

Following the later stage of Commonwealth Civil War, Tangier is able to hijack one of these vehicles to rescue Alias who is pinned down by snipers after he had dealt with Quill, and the two are heading straight toward the Sopot Statue to stop Molov's evil plan.

Smaller and Agiler than the Ultor submarine found on Mars, the S-271 fires the Triton MK1 dumb fire torpedoes as its main source of firepower. Constructed with a titanium-steel hybrid metal and capable of withstanding depths up to 900 meters (2950 feet), these mini-subs are well suited for exploratory purposes and can fare reasonably well in small-scale underwater combat. 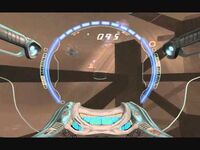