Ravager is the second plague that Darius Mason have encountered. They're considering to be the much aggressive then the Creeper and infuriating at the same time fighting during in swarm.

Ravagers attack with biological weapons, and can leap onto walls or ceilings to get better combat positioning. Ravagers enjoy killing their prey with melee attacks. The bone-like blades on their arms make them very effective at this. Ravagers, like creepers, can spawn continuously from pods, but also frequently spawn in groups from rifts in cave walls.

The ravager's main attack is a volley of fast-moving spines. Like bullets, these spines will be stopped but not reflected by the shield ability. Ravagers are also capable of attacking in melee, though they do so much more rarely than at range.

Ravagers also exist in electric and fire varieties. Their behavior is the same as the basic red ravager, but their projectiles are more slow-moving and have a small, but relatively damaging, explosive elemental effect on impact.

Ravagers move and jump very quickly, making faster-firing weapons (like the assault rifle) the most effective way to deal with them. Very accurate long-range weapons like the rail driver can also be effective, provided the user is quick on the draw. In addition, a well-timed shot from an explosive weapon can easily take out an entire group of ravagers if hit just as a rift opens, before the group scatters. It is very easy to get surrounded and disoriented in a large open area, so retreating inside a building or low-ceilinged area can offer a much safer position. This also forces the ravagers to close in to melee range, where they are much easier to target and eliminate.

Ravager - Ultor Expedition Log (10.588.025)
"The creatures were initially found in stasis, all vital systems dormant. Today we managed to awaken one. : We were testing its shell for electrical conductivity, and it absorbed every ampere we pumped into it. The specimen's reanimation was quite rapid - one could say it 'fed' on electricity.
It also fed on one of my scientists. A minor setback." - Axel Capek

Concept art of the Ravager.

Ravager prepared to ambush Darius Mason in the cutscene of the introduction.

Ravager prepare to fire its projectile at Darius in the cutscene.

Ravager in close up.

Ravager at the ruins of Dust of entrance.

An Electric Variant of Ravager. 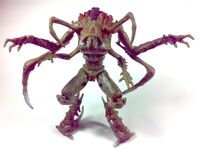