The Plasma Thrower design by the Red Faction, a flamethrower like weapon that emits a plasma stream rather than fire. according to the site, this weapon is good for demolitions and heavy assault.

The Plasma Thrower is deadly at close range against anything, including structures. It fires a continuous cone of plasma that heavily damages anything caught in it, giving it some ability to damage groups of enemies if they are packed together tightly. It suffers from limited range, making it useless at long or medium range fights. It is good for dealing with any enemy that is reliant on close range combat, or in small, confined spaces. 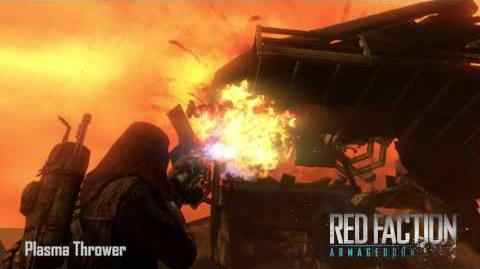 Red Faction Armory - Plasma Thrower
A demonstration on how the Plasma Thrower fires and works
Community content is available under CC-BY-SA unless otherwise noted.
Advertisement