Parker is a member of the Red Faction, The primary revolutionary during the First Martian Revolution and the main protagonist of Red Faction.

Parker's parents, "Dr. and Dra. Parker, if you please", had him enrolled in the best private schools, hired the best tutors, and expected nothing less than perfection from him, for all of his life. While they may have thought this was best, to him, it felt like he was "running their little maze". When he was accepted into Harvard, his parents didn't react in the slightest, which was the last straw. He tore up the letter and headed straight to the nearest Ultor Corporation office and left for Mars to join a mining colony.[1]

Parker is drawn to Ultor specifically because of his fascination with Mars and the promises of "high pay, high risk, (and) high adventure". Unfortunately, on arrival he found that the mining operation was cruel and relentless. After roughly 6 months of working in Mine M-4, he decided to take up arms when a guard killed a miner for seemingly no reason other than for his amusement. Ultor, in an attempt to contain the sudden uprising, tried to seal off the mine, then kill all of the miners within it. After escaping M-4, Parker found himself thrust into the Red Faction's revolt against Ultor.[1] On exiting the main mine, Hendrix, an Ultor security technician who sympathized with the Red Faction's efforts, hacked into Parker's audio and helped to guide him through the complex.

Hendrix attempts to help Parker meet up with a group of miners who are stealing a supply shuttle to escape the complex, but Parker arrives too late. When the shuttle takes off, however, it's destroyed by missiles moments after exiting the docking bay. "Maybe being slow isn't such a bad thing" (Hendrix, upon seeing the explosion).

As Parker traversed further through the Ultor complex, he was contacted by Eos, who gave him the task of eliminating Geothermal Facility No.4, which was, through unknown means, connected to the Red Faction's every move being tracked. After Parker shut down and destroyed a majority of the plant, he was given the further task of kidnapping Ultor's deputy administrator, Richard Gryphon, for Eos, who was sending a team to fetch him. After sneaking Gryphon out of the Admin building, stealing an Aesir Fighter, and destroying an Ultor Personnel Suppression Combot, Orion and his team retrieved and delivered Gryphon to Eos. She learned from Gryphon about Dr. Capek, who created "The Plague".

After sneaking into the Medical Labs, through the very shaft Parker used to incinerate the Combot, Parker blasted through the Security Checkpoint, finding Capek waiting for him. He told Parker that he had been experimenting with nanotechnology and the Plague is a side-effect of injections at the miners' annual medical checkup, at which point Parker disobeyed orders and attempted to kill him. This doesn't work, however and Capek told him mockingly that he was "The first to see [his] new Nanotech shield in action".

After chasing Capek through an underground series of caverns, Hendrix directed Parker to Capek's secret underground laboratory, where he and Eos met up and took down Capek. As he lay dying, he told them there is a cure for the Plague, and that they could stop it from spreading by turning off "the replicators", but refused to tell her how to make said antidote. When Parker insisted to kill him, Eos told Parker that "the antidote is their only hope", at which point, Capek said "Hope? Who has hope; if you have hope, you just don't understand yet. I hope you all die".

With Capek death the lab's self-destruction sequence initiated, Eos stayed behind in an attempt to find the files on the cure, and Parker has orders to find the Communications Tower. On his way there, he discovered that Ultor had brought in its reserve of mercenaries, led by Colonel Masako. After sending a distress call to the Earth Defense Force, Parker escaped the tower. He made his way to a subway system, entering through the tunnel itself. He stole one of the tram carts, and continued down through the subway system, eventually finding and destroying the ground-based missile defence system. However it was only one of two defense systems, and other was the laser defence grid aboard Ultor's space station, which was currently in Martian orbit. To get up there, he would have to find and stow away on the shuttle that was bound for the space station. After sneaking aboard, he began shutting down the station's various systems. While in the process of sabotaging the defence grid, Parker (and Hendrix) received a transmission from Eos, saying that the Mercenaries are killing every Miner on sight before the transmission cuts out.

After destroying the space station, Parker landed back on Mars via an escape pod. Hendrix informed Parker that the mercenaries have orders to destroy the mining complex, covering up any proof of Ultor's wrongdoing. Hendrix came out of hiding to join Parker and help him get through the mercenary base (as it wasn't part of Ultor's main security system); he was killed soon after this by the mercenaries, at which point Masako contacted Parker directly. Parker sneaked into the ventilation, and ends up in an Aesir Fighter docking bay. After detaching one of the fighters from it's magnetic seal, he found and confronted Masako in a final battle.

After Parker reigned victorious, he went down the elevator that Masako used to confront him, to find Eos tied up on the floor, next to the bomb the mercs were going to use to vaporise the complex. After deactivating it, Parker and Eos looked out of the window to find an Aesir fighter that was primed to fire. Suddenly, missiles streaked from out of nowhere, destroying the fighter; the Earth Defence Force had arrived. Eos said to Parker that the EDF will clear out any mercs that are left and that an antidote for the Plague has been made and is being given to any sick miners. She also said to him that she is leaving Mars and that Parker should enjoy his new status as a hero.

By 75 years of age, Parker has moved to a small shack near the Mohole in the Badlands region of Tharsis, where he lives alone and constantly thinking about his past time in the Red Faction. He would sometimes receive visits from his friend and fellow revolutionary, Alec Mason and he would tell him about his past.[2]

Parker's multiplayer portrait while he is disguised as a doctor.

Parker confronting Gryphon in his office.

Parker with Eos after defeating Capek. 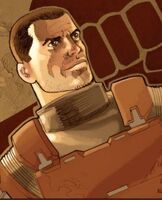 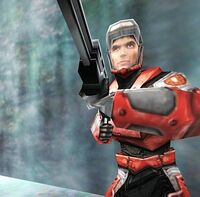 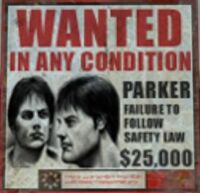