Orion is the second-in-command of the Red Faction during the First Martian Revolution, loyal to Eos.

Orion trains Red Faction members during 'fitness training' for the "Miner Olympics", a front for training the miners for the Red Faction uprising. Among his trainees is Parker who Orion guides him through the training course. Orion is mentioned throughout the game by both Eos and Hendrix but only appeared in person once. After Parker kidnaps Ultor Executive Richard Gryphon, Orion takes Gryphon to the Red Faction base for questioning. Orion survived the attack on the Red Faction base and along with Hendrix and the remaining miners assaulted the mercenary barracks. It is unknown what happened to him after the Earth Defense Force arrived to Mars but it is assumed that he survived the events of the revolution. 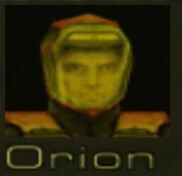 Orion's radio tag in the Playstation 2 version.
Community content is available under CC-BY-SA unless otherwise noted.