The NPSR-755 Precision Sniper Rifle is the personal sniper rifle of Quill during the Commonwealth Civil War.

The NPSR-755 is an advanced sniper rifle variant, with some different strengths and weaknesses as compared to the CSR-60 Sniper Rifle. As to be expected, the Precision Sniper Rifle is extremely accurate and can reach targets at practically any distance - but, there is more. The biggest change from CSR-60 to NPSR-755 is the rate of fire: the latter is semi-automatic, enabling quick follow-up shots. Low recoil further facilitates fast sniper fire. However, in exchange the NPSR-755 is not as powerful as CSR-60. It is still powerful in its own right, being a better alternative weapon to use over the N.I.C.W. or CAR-72 Military Assault Rifle (as well as effective against armour), but it needs headshots to deal with enemies quickly with nano-enhanced enemies. It takes two shots for a Processed enemy to die - as opposed to a one shot kill to a human enemy - so the simple bodyshots are not as effective as in the case of CSR-60. The reduced damage output also makes the ammo efficiency suffer. Luckily, the Precision Sniper Rifle holds 32 rounds per magazine, which helps when you are in need of delivering several shots in a row.

Naturally, the alternate function of the Precision Sniper Rifle accesses its scope. This computerized scope has more powerful magnification than the one on the ordinary Sniper Rifle, and comes with extra features. Its arrow indicator points to the direction of the nearest target, and the crosshair is highlighted once the target is acquired.

In practice, the Precision Sniper Rifle trades damage-per-shot for multifunctionality. With its trademark near-perfect precision it is one of the best weapons to be used at long range, whereas its semi-auto operation, large magazine capacity and limited recoil enable it to perform quite well at closer ranges as well. However, consistent headshots are important for this weapon, but also easy to acheive thanks to its numerous aiming aids. As long as you remain at least somewhat accurate, the Precision Sniper Rifle will prove to be one of the most effective and versatile weapons in your arsenal. In this regard, the Precision Sniper Rifle harks back to its namesake from the original game, the MK/SG-1 Defender Precision Rifle.

The Precision Sniper Rifle is obtained in the later stages of the campaign. You take it from dead Quill after you defeat her in the duel in the Cathedral.

Looking through the scope 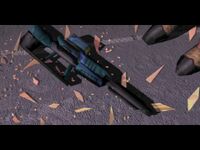 NPSR-755 on the floor during cinematic cutscene 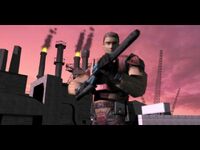 Alias obtained the NPSR-755 after killing Quill in cutscene
Community content is available under CC-BY-SA unless otherwise noted.