The NGL-8 Nanotech Grenade Launcher is the personal weapon of Alias during the Commonwealth Civil War.

The Nanotech Grenade Launcher fires a single, yet powerful 40mm grenade that explodes on impact and is capable of taking nearly everything unlucky enough to be caught in its blast. Its power is enough to kill any human-sized target on spot, and typically will also inflict enough damage to eliminate any hostile within the explosion radius, making it a good crowd-control option. In addition, this weapon does not fall short versus vehicles either, and is the best gun for anti-vehicular combat if you are short on the W.A.S.P. ammo.

The NGL-8 not only offers high firepower, but a high rate of fire as well. It is automatic, holds six grenades per magazine, and quick to reload. It is also highly accurate, and has the longest range out of the grenade-type weapons.

The primary fire launches contact-fuse grenades, whereas the alternate fire sets the detonator to a timed fuse. These timed grenades can bonuce off solid surfaces, and thus can be used for indirect fire. However, they will still explode upon impact with a living target. The timed grenades detonate on their own after approximately four seconds.

Because it can easily blast through many walls, floors and other surfaces, the NGL-8 is the go-to weapon for finding alternate routes, secret rooms and blowing away enemy cover.

Thanks to its multiple advantages, the NGL-8 is a very useful weapon throughout the campaign. Its only notable drawback is the self-damage risk, due to which you should not choose this weapon for close combat engagements.

The NGL-8 is the preferred weapon of Alias, the demolitions expert in Molov's squad of elite, nano-enhanced super soldiers. Accordingly, it will be in your possession for the most of the game, starting with the assault on the Public Information Building.

The NGL-8 is available in multiplayer. Well-landed shots will grant you instant kills, and it is still the principal weapon for Geo-Mod in this gameplay mode as well. 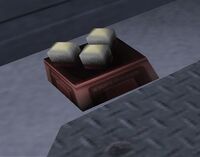