Mutants are the victims of Axel Capek's cruel experimenting.

Like the Reapers, Mutants will start to run around when they see the player in an unreachable spot. Once they are able to reach the player, they will began to charge at them.

Mutants have 75 health points. An armor piercing bullet kills them in one shot. It is advised to use the pistol on them to save ammunition in your other weapons. Since they are humanoid, they are much easier to hit than the Reapers. 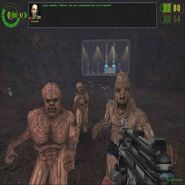