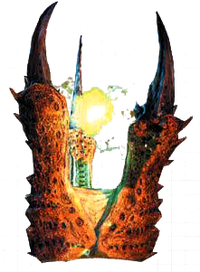 Monolith are peculiar claw-shaped alien structures that sprout from the ground, usually in support of an enemy ambush or defensive effort. They are first encountered by Darius Mason while investigating a distress signal from a mining colony.[1]

The Organismic enhances all creatures within a wide radius, making them tougher to kill. Creatures enhanced by a monolith have a pulsing green barrier around them, serving as a type of armor to protect them.

The monoliths attack by charging up a large ball of greenish plasma energy, which explode upon contact, inflicting heavy massive damage. Which need to be avoided immediately. [1]

Surprisingly, The Maul does the most damage to a Monolith. However, be careful after killing it, so better get away as it will explode after being killed as it can instantly kill you if it occurred especially in the highest difficulties.

Description of a Monolith.