The Mining Exo is a available walker vehicle for Red Faction: Armageddon.

The Mining Exo is a civilian heavy walker used for a variety of intensive tasks on Mars, including but probably not limited to bomb disposal, mining and heavy construction. Notably Darius Mason owns one which he outfitted with a Magnet Gun.

Darius' walker is destroyed after it falls into the bottom-pit inside the Marauder Ancient Temple that incarcerated the Plague several centuries ago.

Darius manning the Mining Exo to dig the ruins. 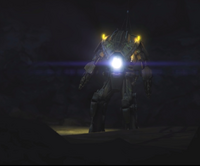 Darius arming the Mining Exo to investigating the Mysterious Seal after destroying it.