Colonel Masako is the main antagonist of Red Faction and the leader of the mercenary unit, a hired group of contract killers loyal to the Ultor Corporation during the First Martian Revolution.

There is not much known about her and her Mercenary Unit outside of her being the leader and the group having committed many murders for Ultor for at least 15 years. Much of this work included eliminating people participating in strikes and protests. She joined the Merc Corps at 16. Before joining, she spent time in London, and planned to return there to kill the "street scum" that she had bad run-ins with.[1]

She appears to enjoy killing as she murders both Red Faction members as well as Ultor guards and personnel (offscreen) just because she wants to do so.

After Ultor becomes heavily weakened because of the actions of the Red Faction member called Parker, they call their secret weapon, a ruthless and powerful mercenary unit led by a woman only known as Masako, Her unit is ordered to destroy any evidence that could jeopardize Ultor's control on Mars and so, her unit kills hundreds of Ultor personel and Red Faction members and destroys several Ultor facilities.

She has little respect for Axel Capek, the Ultor Administration or the Ultor Guards and is more than happy to let them all die at the hands of the Red Faction.

She either kills or orders the killing of Hendrix by means of an explosive device and captures the leader of the Red Faction only known as Eos.

After her unit is weakened, she attempts to destroy Ultor's main complex with a large bomb to eliminate any remaining Red Faction members and evidence of previous wrongdoing. In the end, she is killed in a firefight with Parker, who disarms the bomb after her death. 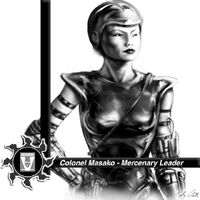