The Marauder Scout Walker is an advanced light walker utilised by the Marauders and Cultists in the Cultist War and the resulting Plague Scourge.

It can be considered a shrunken version of the Marauder 'Mantis' Heavy Walker with faster speed, more manoeuvrability and still armed with a powerful array of weaponry. It falls behind the bigger cousin, however, in both armour and shielding.

This vehicle is also armed with a unique weapon, called the 'Lightning Beam'. This is powerful enough to make most infantry/small enemies explode into bloody showers of limbs and bone. Its secondary weapon, the 'Convergence Laser', is several beams that converge at the point being aimed upon to create a powerful explosion. This can also be bought as a handheld weapon, also called the Convergence Laser.

Though largely inefficient against larger Plague (E.G. Behemoths) and Marauder/Cultist vehicles (E.G. SHIVA Exosuits), this vehicle can 'kick' smaller enemies out of its way using one of its four armoured legs. 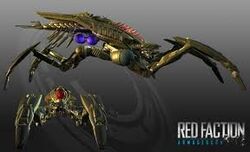