The MK/SG-1 Defender Precision Rifle is the primary weapon of choice for Masako's Mercenary Regiment.

More of a battle rifle than a sniper rifle, the MK/SG-1 is a 5.56mm caliber semiautomatic rifle, loaded with a 20-round magazine. The ammunition comes with explosive-tipped bullets, delivering serious damage no matter where it hits, and does not fear armour either. A few bodyshots at most will down any human opponent, even heavily armoured (and headshots are almost always lethal).

The scope on the Precision Rifle can be used to pick off targets at longer ranges. In addition, the scope has nightvision enabled. It is not as powerful as the Sniper Rifle's scope, but adequate for the most long-range engagements.

The Precision Rifle is a jack-of-all-trades weapon, since it excels at all ranges. It pretty much makes a few of the earlier weapons obsolete due to its versatility. Nominally, the Precision Rifle is best suited for mid-range, overshadowing the UAR-42 Assault Rifle. However, it is also more than sufficiently precise (true to its name) to rival Sniper Rifle at long range, as well as being a viable weapon for close quarters combat, where its effectiveness virtually outpaces the Flamethrower, the Submachine Gun, and contends even with the Shotgun (but not the Heavy Machine Gun).

The Precision Rifle lacks any significant drawbacks. Although it cannot fire automatically, the combination of high damage, high accuracy and decent magazine capacity renders this moot. In addition, with enough trigger practice you can fire the Precision Rifle very fast (much like the Pistol), all but negating this already minor "flaw". As an all-round high perfomer, the Precision Rifle is arguably the best weapon in the game bar none, reliable (if not outright excellent) for most combat situations.

The Precision Rifle can be first acquired shortly after the Capek battle, from the Mercenaries - and is the first weapon of theirs encountered. Most of the Mercs will use the MK/SG-1 as their main weapon of choice (giving you a steady supply of ammo), and later on it becomes a common weapon in the hands of the Red Faction combatants as well.

The Precision Rifle is also available in the multiplayer. 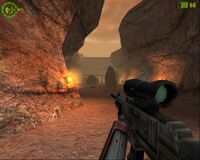 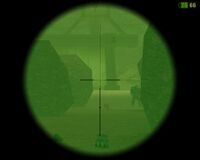 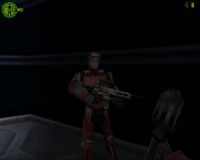