The L.E.O. Exosuit is a powerful combat walker designed by the Red Faction in order to increase the amount of damage an ordinary soldier can inflict, allowing them to take on multiple hostiles at once. The idea, undoubtedly, has its roots in the successful deployment of mining, industrial,and combat walkers during the Second Martian Revolution by the revolutionary founders of the state.

It is in service by the time of the Plague Scourge, heat-seeking rockets and .50 caliber machine guns working together to make it a fearsome weapons platform, mostly filling roles in artillery and recon. Enhanced strength granted by the suit is also a massive boost, allowing the user to charge through walls and hit most enemies hard enough to send them flying across the room.

Both of the weapons appear to be incredibly powerful variants of the handheld versions seen in the hands of Red Faction soldiers across Mars. The primary armament, known as the 'L.E.O. Machine Gun', is the best way to dispatch hordes of enemies, due to the fast firing rate and quick cool-down time.

The secondary, more explosive armament is known as the 'L.E.O. Rocket Launcher', which fires a trio of heat seeking missiles that can lock on to three individual targets, no matter how fast moving.

L.E.O Exosuit in action at the debut trailer. 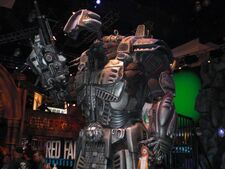 Darius inside the L.E.O Exosuit engaging the plague. 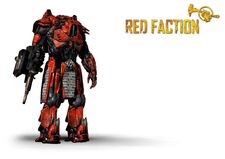 A red version of the L.E.O. Exosuit appeared in Red Faction: Battlegrounds.

Darius inside the Exosuit readying to combat against the plague.