Kara is the deuteragonist of Red Faction: Armageddon. she ran away from the Marauders when she was very young, unable to stand the entrenched hierarchy of their system. Like Samanya, she has street smarts and an intimate knowledge of science, and decides that smuggling goods around Mars and from Earth is a worthwhile course of action as it satisfied both her rebellious nature and is easy money. It is while working in the underground caves of Mars that she meets Darius Mason and despite their different outlooks, they become firm friends.

Near the end of the game, Kara and Darius exit the Mantis to make repairs, they share a kiss only to be attacked by the aliens. While Darius tries to hold them off, Kara is stabbed through the chest by a tentacle and dragged away. Kara is presumed dead after the Armageddon ends. 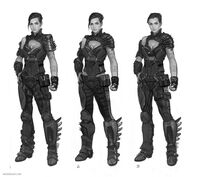