The JF90-HMG/BF Heavy Suppression Machine Gun (or HMG for short) is the heavy weapon of the game and it was issued by the Red Faction rising up against the Commonwealth during the civil war and later by the Molov-led Nanotech Enhanced Forces. It is the signature weapon of Repta.

Capable of firing huge numbers of bullets in a short period of time, the HMG is most effective when opponents are engaged at close range. It is best equipped in situations where raw firepower and maximum suppression are required. The .50 caliber bullets make short work of any hostile personnel. The HMG carries 99 rounds in the magazine, allowing to fire prolonged volleys. This makes it an excellent weapon against large groups of opponents. In turn however, the reload action is also very long, so never try to do it when out in the open.

The HMG is sorely lacking in accuracy, so it is most effective at close range. The top-mounted aiming indicator will light in red if you have a target in your crosshairs. Still, generally this is a weapon that relies more on hitting everything in the room, rather than precise attacks.

The HMG is probably the best weapon to wield against the Processed, as they always come in large numbers and will invariably seek to attack you up close, which is the ideal scenario for the HMG. As a bonus, the HMG's firepower comes in handy against the Processed' superhuman endurance.

A very powerful weapon, the HMG is the preferred weapon of Repta, the heavy-weapons specialist in Molov's squad. The first chance to obtain the HMG for yourself is the High Rise Hell level of Hanging in the 'Hood chapter, where it may be taken from one of the fallen Red Faction fighters. Another, free-to-take HMG can be found in the next level - Death From Above - in the tunnels section.

Repta equipped with the JF90-HMG 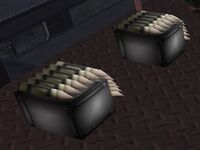 Heavy Machine Gun on the floor
Community content is available under CC-BY-SA unless otherwise noted.
Advertisement