The Heavy Walker is the rarest of the three walkers, but the strongest of them all. Its only weapons are two large arms that are used for swiping and swinging at buildings, cars, and people. It first appears in the mission "Industrial Revolution". Where you need to retrieve it from the EDF to make the battle and turn the tide for the revolution.

Heavy Walker Toy after the announcement of the special edition package.

Heavy Walker in action at back view. 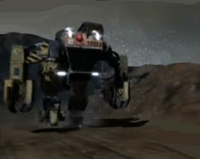