The F60 Heavy/Suppression Machine Gun or HMG for short is a weapon that was mostly used by Masako's Mercenary Regiment during the First Martian Revolution.

The Heavy Machine Gun is a big automatic weapon that can lay down a large volume of bullets quickly. A brutally effective firearm, it is about the best gun to be used at close range. Fed from a 99-round box magazine, it can sustain long volleys without needing to reload. Due to its large magazine size and high rate of fire, the Heavy Machine Gun is best used against larger groups of enemies. Each 7.62mm round does moderate damage, but the high rate of fire makes up for this.

The Heavy Machine Gun's biggest weakness is long reload time. The gun's reload is easily the longest out of all weapons. Do not ever attempt reloading while out in the open, because chances are you will not survive before your gun is ready. Retreat, then reload. Also, keep in mind that the F60 has the biggest magazine of them all, so delay your reloads accordingly.

The other flaw of the Heavy Machine Gun is its lack of accuracy. Being a suppression weapon, it is not suited for precise shots. Instead, spray and pray as you strafe your enemies - eventually they will relent to the hail of bullets. Do not worry about ammo either, as you can carry three spare magazines, and this gun is hardly a rare sight either.

The secondary fire addresses the aforementioned shortcoming in accuracy: it is a slow, almost semi-auto-like fire. This slow fire mode is almost useless in close-range firefights, though in exchange it is more accurate at longer ranges. It can be best to use the F60's secondary fire at medium-to-long ranges.

The Heavy Machine Gun is often used by heavy Mercenary troops, but a few Red Faction members also utilize this weapon towards the end of the game.

The Heavy Machine Gun is also available in the multiplayer.

The F60 is succeeded by JF90 HMG in 2080, when the Commonwealth Civil War occurs. 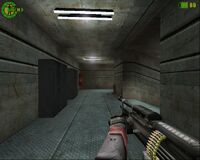 The HMG in-game
Community content is available under CC-BY-SA unless otherwise noted.
Advertisement