The F-1TL Fusion Rocket Launcher is the explosive launcher of choice for the mercenaries and it saw use during the First Martian Revolution.

The Fusion Rocket Launcher is the most powerful weapon in the game. Most simply described as a super rocket launcher, the F-1TL has an absolutely huge explosion radius, and is capable of killing multiple enemies with a single shot effortlessly. More, it is able to blow gigantic holes in the terrain, unmatched by any other Geo-Mod-applicable weapon.

However, such fantastic power comes at a hefty price. First off, the Fusion Rocket Launcher can only hold a single rocket at a time, and every reload takes a long time. Secondly, you can only carry a few rockets in reserve, and the ammo is scarce, so use it sparingly. Thirdly, the size of the weapon is not any less impressive than its might, and so it obstructs a large part of your field of vision (around a third). Fourthly, the rocket's velocity is very low, making it difficult to hit anything mobile from longer ranges. And the last but not least, the explosion's power is (obviously) exceedingly dangerous to you as well - a single badly aimed shot is all it takes to end your life in bits. If you want to stay alive when wielding this weapon: keep your distance, aim carefully, and always run for cover after launching the rocket (not only shielding you from splash damage, but also the accompanying intense flash that may blind you for a moment).

It is also noteworthy that the F-1TL is deprived of any extra functions, and can only fire "dumb", unguided rockets. However, due to the size of destruction it leaves in its wake, there is little need for accuracy.

The Fusion Rocket Launcher is often wielded by heavy Mercenary units, whom are not afraid to use their launchers to destroy the player. However, since they tend to aim at your center body mass, the rocket will be dodged easily if you see it coming, giving you ample time to retaliate while your enemy reloads.

The Fusion Rocket Launcher is available in multiplayer as well, however it is usually a hidden weapon on most of the maps. 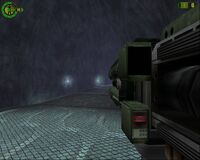 The Fusion Rocket Launcher in-game.
Add a photo to this gallery
Retrieved from "https://redfaction.fandom.com/wiki/F-1TL_Fusion_Rocket_Launcher?oldid=21513"
Community content is available under CC-BY-SA unless otherwise noted.