Eos is the tritagonist of Red Faction and the leader and founder of the Red Faction in 2075. Due to her acts against the Ultor Corporation, a sector in the Tharsis region is named after her.

Being one of the most respected miners on Mars, it was thought that she worked as a Foreman, working with the other miners including Parker. Eos was one of the first hit by the plague released by Axel Capek. At one point Eos was seen without her face shield and it is revealed that she was disfigured on that side of her face. However after the final battle and disarming of the bomb, she was located tied to the device and she has no scars. Parker even goes so far as to a point where he gets close to her face and gets a awkward reaction from her. 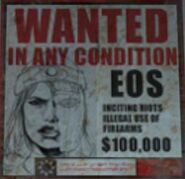