Echo is, as of 2080, the leader of the Red Faction forces on Earth, leading the soldiers of the resistance in the Commonwealth Civil War against the Victor Sopot and his armed forces.

After the war against Sopot is over, He, along with Alias and Tangier are betrayed by Molov. He then arranges a meet up with Alias by the underground sewer in an attempt to form a plan on how to stop Molov. However, he is shot and killed by Quill's Rail Driver before he could relay any of his plans to Alias. 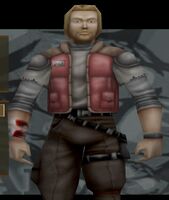 Echo Model in the Menu

Echo during in communicating