The EDF Supply Truck or EDF Cargo Truck, is a behemoth 10-wheeler cargo vehicle used by the Earth Defence Force during the Second Martian Revolution and only in very particular circumstances.

It typically saw use in troop transport actions, though it can only accommodate three people in the cab, and in supply convoys. They are very slow and hard to manoeuvre, being one of the bulkiest vehicles on the face of Mars at the time.

EDF Heavy Trucks can come without a turret, or armed with either a heavy machine gun or a heavy gauss. While these might be have been ample protection for an EDF Staff Car or EDF Personnel Carrier, given the great size and slow speed of the Heavy Truck it is severely lacking in defensive capability which may have contributed to the rarity of its deployment. The cargo bay only can be viewed if the rear doors are destroyed. The cab had 2 butterfly-style doors (opens up and closed down).

The vehicle can push small vehicles easily, but can´t push tanks, walkers and other similar trucks.

The EDF quite often uses a Civilian Flatbed Truck in their convoys, instead of their purpose-built military trucks.

In the last mission, it is primarily used for roadblocks, with soldiers in the turret. Each roadblock consists two or three trucks in the road and one close to the objective. The player can acquire the truck during this mission, but the turret and other vehicles can destroy the truck.

These vehicles are the rarest vehicle in the game, because they only appear in some missions, as well in some sub-missions.

To obtain any of the three variants:

1. Start the Heavy Metal activity just south of the Eos Memorial Bridge. In this activity, the EDF will send Supply Trucks of all variants after you.

2. Get in the Combat Walker provided by the activity.

3. When the Supply Truck variant you want spawns, very carefully shoot the front with rockets from your walker. The first one will kill the gunner, and the second will kill the driver. If necessary, fire more rockets until the driver dies. If you're lucky, the driver will get out on his own, but this is uncommon.

4. Get out of the walker and into the truck. Note that if there are too many enemies, (Especially EDF Scout Cars,) the truck will go down quickly, considering you just shot it with rockets.

5. Once you have the truck, drive it out of the designated activity area. With the remaining armor the truck will have after your rockets from the Walker, you may have to obtain another.

6. Once you fail the activity, the truck will be yours and you may take it to any safehouse you wish.

Concept Art of the Supply Trunk.

Supply Trunk in Eos, transporting troop on a raid of the secret Red Faction Safehouse. 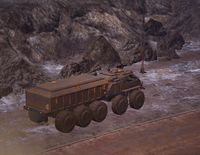 Another Supply Trunk in Eos, transporting the troops to another location. 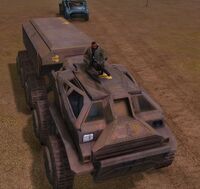