The Staff Car, codenamed 'Wolf', is among of the most-utilized vehicles deployed by the Earth Defence Force during the their Martian campaign. They are generally used as transports by corporate executives, officers, political figures and other VIPs, having a far more spacious and extensive interior and better armour than the EDF Scout Car. However, they are not limited to this role and are most often employed more generally to transport extra troops into battle, being able carry six (two on the side) people whilst its smaller cousin can seat only two.[1][2]

The EDF Staff Car also often comes equipped with a roof-mounted pintle turret to give the vehicle a measure of offensive capability and allowing suppression fire to be laid down while its occupants disembark. There were three main notable variants in the service of the EDF during their reign on Mars, the first of which came armed with a standard Machine Gun Turret and the second with the more powerful Gauss Turret. The last variant has no turret and the roof hatch is instead sealed with a fixed cover.[1]

It is more resistant to weapon fire than the smaller EDF Scout Car, but due to its greater weight and less capable suspension, it takes more structural damage during extremely rough driving over difficult terrain.

During its bid for power, the White Faction would retrofit their Staff Cars with twin rocket batteries in addition to its previous armament. With these powerful modifications, they were capable of great devastation.[3]

An EDF Staff Car retrofitted with rocket batteries by the White Faction. 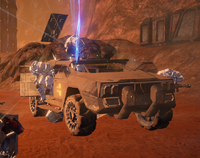 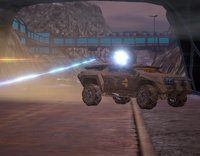 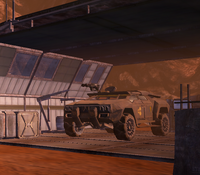