The EDF Sniper Rifle is the standard-issue sniper utilized by Earth Defence Force troops in the field of combat around the time of the Second Martian Revolution.

Its powerful scope allows accuracy at unparalleled range, though the weapons usefulness is diminished by the EDF Rail Driver which, though rarely issued, also has a long range and accuracy whilst also allowing the wielder to fire, and see, through walls and vehicles. The Sniper Rifle also has less ammo than its more high-tech cousin, though its much more easy to scavenge.

It also becomes more and more frequently scavenged and wielded by Red Faction insurgents than EDF towards the end of the conflict, which given its superior ammo and capabilities would have presented a problem for them. 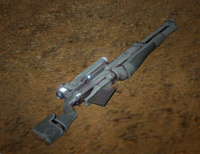 Sniper Rifle lying on the ground
Community content is available under CC-BY-SA unless otherwise noted.