There is more information on this subject at the Saints Row Wiki.

The EDF Scout Car is a vehicle often used by troops of the Earth Defence Force, the Scout is utilized for a variety of activities including reconnaissance, convoy escort detail, as well as patrol duty. The vehicle's light frame and 4WD drivetrain make it fast and highly mobile, ideal for the rugged Martian landscape.

The Scout Car's armour is resistant to light weapons fire, but does little against many of the powerful improvised weapons used by the Red Faction. They often come either a light machine gun or a Gauss Turret as a roof mounted turret, which can make the Scout difficult to take on without the right equipment.

The EDF Scout is a fairly fast vehicle, and while less resistant to weapon fire than the EDF Staff Car, its excellent suspension mean that it it actually takes less structural damage from rough driving over uneven terrain. 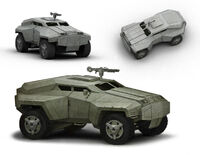