The EDF Rail Driver is a highly specialized weapon issued to the servicemen of the Earth Defence Force around the time of the Second Martian Revolution.

Adapted from the older FCA-26 Rail Driver used to great effect by the Mercenary Regiment loyal to the Ultor Corporation during the course of the First Martian Revolution, it is unsurprising that the EDF would have adopted it.

The Rail Driver shoots ultra-high velocity depleted uranium slugs that appear like blue beams of light and can penetrate almost anything including vehicles and structures, effectively making cover irrelevant to the wielder and turning vehicles into death traps thanks to its powerful x-ray scope.

Rail Driver lying on the floor 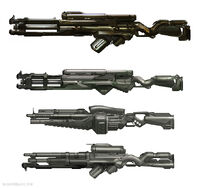 If one studies the Rail Driver and the spikier they will notice many similarities
Community content is available under CC-BY-SA unless otherwise noted.
Advertisement