The EDF Peacekeeper is an automatic combat shotgun which is issued to troops in the service of the Earth Defence Force around the time of the Second Martian Revolution and originally used primarily for crowd control. It is also often scavenged and used by both Marauders and the Red Faction insurgency during the conflict.

The EDF Peacekeeper is highly effective in a close quarters scenario, easily besting anyone using an Assault Rile or Pistol. While it's pellets are capable of hitting multiple opponents from one shell the damage is too low to kill them. At any distance further than a few meters the damage this weapon can deal is drastically reduced and anything at range is not going to be hit by this weapon. It is best used alongside some form of assault rifle or sniper rifle as a back-up weapon incase the EDF forces get too close.

Ammo capacity and low damage/range indicate that the Peacekeeper is likely chambered in 20 gauge birdshot or beanbags.

The closest real life cousin to this weapon is a hybrid between an AA 12 automatic shotgun and a Beretta 1301. this exact weapon does not currently exist as of this writing but the Peacekeeper shares characteristics of both. 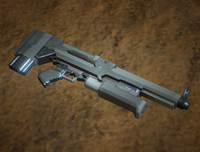