The EDF Mobile Rocket Artillery, EDF Artillery Tank or EDF MLRS, is designed to be a mobile support weapons system by the Earth Defence Force and sees service in the Second Martian Revolution. It can be used for indirect engagements against heavily entrenched enemies, or for tasks require the demolition of an enemy bunker or quite simply a close-artillery support role.

Even single rockets from its missile pods cause great devastation, able to kill clusters of infantry, and heavily damage vehicles and structures. However, its firepower is not confined to single shots; the rockets can be ripple-fired in devastating rapid-fire salvos that can slaughter entire infantry platoons, wreck sizeable vehicle convoys, and blast apart even the largest large structures into smoking ruin, all in a matter of seconds.

There were two types of this vehicle: The first is the standard type deployed by the EDF. The second is seen near the end of the game, heavily modified and improved by the Red Faction for purposes of undertaking a difficult assault. Both machines are capable of projecting firepower terrifying to behold.

Because the EDF Mobile Rocket Artillery is a support unit, it carries no weapons other than its complement of rockets (though in the main image, you can see a machine gun in the hatch). However, the rockets are incredibly destructive; this is a truly fearsome vehicle to fight at range. The rockets are fired in either of 2 ways:

Note that there is a short delay after pressing the trigger, during which the hatches on the missile tubes will open, before launch. However, this can be circumvented by tapping the trigger briefly to open the hatches in preparation, before engaging the enemy.

The Mobile Artillery is well armored, and can withstand damage similar to that of the EDF Main Battle Tank. It can crush small vehicles, and is well-armored enough to crash through buildings with minimal damage to the tank. 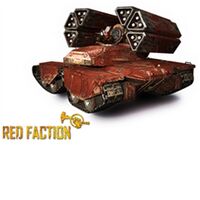