The EDF Gauss Rifle is a powerful portable variant of the Gauss Turret issued to troops of the Earth Defence Force during the Second Martian Revolution. Working on a principle involving a network of electromagnetic coils, the Gauss Rifle can tip vehicles, blow through walls and cause havoc among hostile infantry. It can also send an EDF aircraft flying backwards if shot in the front. Its small magazine makes it impractical for prolonged firefights, but its stopping power and projectile penetration make it a good long-ranged weapon.

The Gauss Rifle is also picked up and used by the insurgent militia of the Red Faction, quickly becoming one of their more favored weapons.

The Gauss Rifle isn't encountered until the later stages of the game. It is a very good choice for a primary infantry fighting weapon, capable of killing most EDF troopers in a few hits. The weapon is unique amongst the other EDF weapons as it is the only projectile weapon which can cause significant damage to vehicles and structures. In combat the weapon offers the player with a means of breaking apart and shooting through enemy cover. Its projectiles can also blast EDF vehicles, including the AAX Raven backwards and destroy them. While it suffers from a slower rate of fire when compared to other assault weapons, its high damage easily justifies its use. 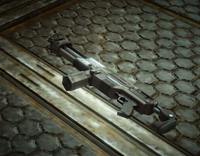 Gauss Rifle lying at the floor
Community content is available under CC-BY-SA unless otherwise noted.