Grenade has other meanings. See Grenade (disambiguation) for other uses.

EDF Fragmentation Grenades or EDF Frag Grenades are an explosive weapon employed by EDF soldiers. They have a small blast radius and has medium damage, taking about hardly a quarter of Alec Mason's health. It is usually about thrown 10 feet from EDF soldiers.

The EDF Fragmentation Grenade is the standard EDF protocol in their use generally means they'll shout something along the lines of "Frag out! or "Grenade loose!" to alert other EDF combat personnel in the area.

These cannot be used by the player, however, the Marauders employ a similar thrown explosive that causes even more damage.

These grenades are not accurate to real life frag grenades as most real-life counterparts have a minimum kill radius of 30 meters. The overall design is quite possibly based on flashbang grenades. 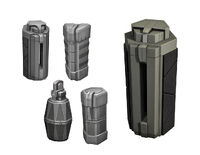 Concept art for the EDF hand grenades
Community content is available under CC-BY-SA unless otherwise noted.