The EDF Assault Rifle (also known as the EDF AR) is the basic field assault rifle issued to Earth Defence Force troops in the Second Martian Revolution. So reliable, effective and compact is this weapon that both Red Faction insurgents and Marauders will often scavenge them from the EDF.

The EDF Assault Rifle is one of the best weapons through the earlier stages of the game. Its high rate of fire, high magazine capacity and availability of ammunition make it a solid choice when the EDF begin to send waves of troops after Mason. The Rifle is, like most EDF weapons, better suited to taking on personnel rather than vehicles or buildings. Using this weapon in conjunction with the Remote Charges or Rocket Launcher allows the player to deal with both infantry and fortified structures. EDF Enforcer or the EDF Gauss Rifle are more powerful and more accurate alternatives. the EDF assault rifle has longer range and more stable burst and single fire capability when aimed properly than its more high tech cousins. full auto fire is not advised if ammo is a concern or you are facing multiple targets, or tougher enemies. the EDF use this weapon from the opening cutscene to the end of the assault on mount vogel and beyond, due to its reliable damage and fire control tactics. the marauders also use it in a more limited capacity, making ammo for this weapon very easily acquired, even in tight situations. due to these factors, its a great weapon for unfamiliar areas and situations. 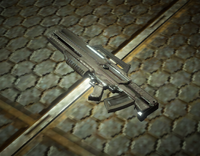 Assault Rifle lying on the floor 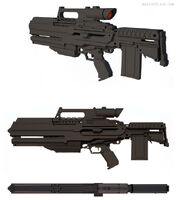 Final Concept Art of the Assault Rifle
Add a photo to this gallery
Retrieved from "https://redfaction.fandom.com/wiki/EDF_Assault_Rifle?oldid=21474"
Community content is available under CC-BY-SA unless otherwise noted.