Administrator Davis was the admistrator for the Ultor Corporation on Mars during the time of the First Martian Revolution.

Davis was the administrator working for the Ultor Corporation during the First Martian Revolution. His office is located on the 3rd floor of the Ultor Office Complex opposite to Richard Gryphon's office.

Gryphon on his arrival to Mars asked Davis about the miner population problem, but Davis told him to leave it alone. Gryphon describes him as a "burned-out shell of an old man", probably due to the stress of knowing how the head of Ultor's SciLabs, Axel Capek, has been involved with the plague. 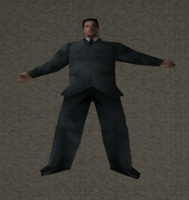 Davis's model in the PS2 version of the game
Community content is available under CC-BY-SA unless otherwise noted.