Creepers normally have two methods of attacking a target. One way was to get up close to its prey, then leap and strike at it. The second way was to stay in range of its target, to spit some form of acid towards it.

Due to the large amount of Creepers in the Plague, not all of them looked similar to each other. The most common ones were red-eyed Creepers, which were the most commonly encountered of the two subspecies. The other variant of the creeper is the alpha creeper, which had blue eyes and was much bigger than the red-eyed variant, being closer to a ravager in size.

As the weakest enemies in the game, any weapon is arguably effective against these creatures. However, it is best to use more common weapon types on them to conserve the best ammunition for the deadlier enemy types. The Assault Rifle can easily dispatch them at any range, and just about any explosive weapon will kill them with a direct hit. Shotguns are also effective at very close range, being able to kill Creepers in a single hit if they are close enough. If encountered in clusters at close range, the Shockwave ability is a very effective means of dispatching them. They are also extremely vulnerable to melee attack up close, though when fighting large groups of these monsters it is advisable to try and fight them at a distance, as a melee attack can easily kill one of them, but leave you vulnerable to being overwhelmed by the others.

Creepers advance aggressively, quickly jumping between walls and surfaces and attempting to drop in front of the player. They prefer close range combat and excel at overwhelming their opponents with numbers, or as by serving as a distraction for the more powerful Plague lifeforms. However, they do possess the ability to spit acid, giving them some ability to fight at a distance.

If you're fighting through a seemingly never-ending wave of these enemies, then there might be a spawn Pod nearby. Eliminate it before you waste up all of your ammo and lose all your health.

Creeper - Ultor Expedition Log (10.221.589)
"Many called this expedition a fool's errand. But today, after descending more than a kilometer below the Martian surface, we made a monumental discovery.
Preliminary analysis indicates that the creature is unrelated to any of the simple bacteria that still thrive in the planet's frozen soil. It is as alien as it is beautiful - evidently a stranger to Mars as we ourselves once were.
These passageways travel deeper. We must do the same." - Axel Capek

Creeper introduced at the cutscene.

Creeper emerging from the incubator pod at the cutscene.

Creeper ganging up on Darius. 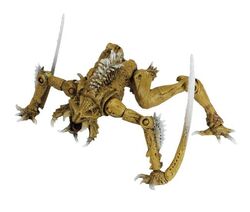