Crate Molov is a high ranking soldier in the Sopot Special Forces. He is the leader of a squad and he, along with Quill, Repta and Shrike, turns corrupt after Molov becomes the new Chancellor of the Commonwealth. He is the main antagonist in Red Faction II.

Crate Molov served in the Army of the Commonwealth, and was eventually appointed to the position of Secretary of Defense. During this time, he was an advocate for the use of nanotechnology to create super soldiers and eventually became the first to volunteer for the super soldier project.

After they ally themselves with the Red Faction, they storm the Commonwealth's propaganda center and almost captured Sopot but he managed to escape, after heavy fighting in the streets between the Red Faction and the loyal forces of Sopot, the Squad is reunited on the Missile Base that Sopot was hiding named the citadel.

Alias eventually reached Sopot, and he is killed for his betrayal. After Sopot's death, Molov usurps his position as head of Commonwealth, He then declares Alias and Tangier enemies of the state for aligning themselves with the Red Faction. Later, Alias and Tangier come up with a plan to shut down Molov's nanotech laboratory, located inside a statue of the previous leader Sopot.

During the ensuing battle in the lab, Alias kills Repta, and destroys the power generators, which cause the statue's foundation to become critical. Molov attempts to flee by scaling the statue with a nanotech cell. In a confrontation at the top of the statue, Shrike betrays Molov and sides with Alias and Tangier, reclaiming the nanotech cell from Molov's possession. Determined for victory, Molov climbs into a nearby Battle Armour suit and fights Alias. Using the disastrous atmosphere to his advantage, Alias evades Molov's attacks and a huge battle between the two ensues. Molov is eventually defeated by Alias, and the statue begins to collapse. Alias is rescued from the collapsing statue at the last moment by Shrike, in his Gunship. 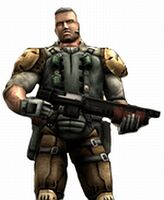 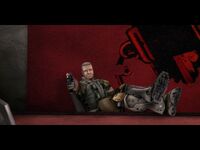 Molov Corpse after defeated by Alias