The CMRD-32 Magnetic Rail Driver is a railgun-type weapon used by Commonwealth and Nanotech Enhanced Forces.

The CMRD-32 Rail Driver will deliver an instant kill almost any human enemy you will come across (the only exception are the boss fights). The ferromagnetic slugs are fired so incredibly fast, that they can shoot through any wall or cover (or people). Their range is virtually unlimited, and accuracy unwavering, so the Rail Driver can be used as a heavy sniper weapon of sorts.

However, as deadly as the Rail Driver is, there are two major problems that you'll have to overcome in order to use it effectively. The first is its very slow rate of fire. If you miss, you have to wait 2 seconds before it can fire again. The magazine is also small, containing only three slugs. In result, the practical rate of fire of CMRD-32 is the lowest out of all weapons. Do not bring this weapon into close range firefights, because it will not end well for you. You can also carry only 12 slugs in reserve, so pick your targets wisely.

The other big problem is the aim. When you use the zoom function, you will access a special scope that is able to see the locations of enemies through the nearby walls. However, the only indication of their presence given is a small, pulsing target circle. It is hard to aim to hit them or know exactly where they are. Also, since the scope cannot actually see through the walls (and obscures your field of vision with a heavy blue tint), you will not know the terrain behind or which way the target may go. It takes a lot of time getting used to be able to aim effectively, and even then it is not a guaranteed hit by any means. It may be beneficial to search for stationary targets first (like enemy snipers), especially since using the scope inevitably consumes more time per shot.

The CMRD-32 makes its first appearance in The Back Alleys level, where you will face an ambush from Sopot military forces equipped with this weapon. Some of the Quill's sniper retinue will also carry CMRD-32s.

Molov will use a Rail Driver in the final showdown at the Sopot statue, after his walker is destroyed. His Rail Driver fires significantly faster than the standard version, so do not stop moving (thankfully, in campaign the Rail Driver does not kill you on spot, erasing one of your portable medkits instead).

The Rail Driver appears in multiplayer, albeit with upgrades. Its magazine capacity is doubled, and its ammo reserve is tripled. Thanks to these changes, the Rail Driver can be utilized to much bigger extent as compared to the campaign - and naturally, in multiplayer all are equal before it, dying to a single shot. 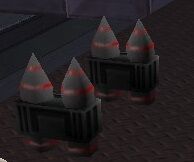